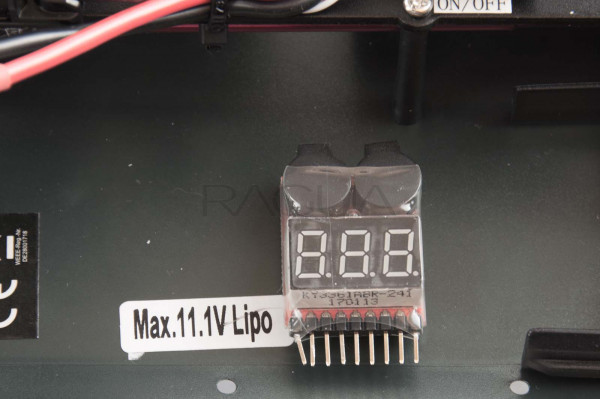 The current technology is called lithium-polymer accumulator. As with most lithium-ion batteries, the negative electrode is graphite, the positive electrode is lithium metal oxide. However, lithium polymer batteries do not contain a liquid electrolyte, but a polymer-based one, which is available as a solid to gel-like film. LiPo batteries used in RC model making consist of 2 or more so-called LiPo cells. Each cell contributes to the total charge of the battery pack 3 to 4.2 volts. This difference makes the difference between a discharged and a charged battery. A LiPo cell should not be discharged below 3 volts, otherwise the cell will suffer permanent damage. For example, the models Dune Fighter and Black Commando use a power electronics that supports 2-cell batteries (2S), while the Dune Fighter 3S uses 3-cell power electronics and is operated with the corresponding battery (3S). Most modern vehicles, as mentioned above, have an automatic battery protection system that prevents the battery from becoming deeply discharged. If this automatic system detects that the voltage has dropped to 3 volts per cell, the vehicle is automatically shut down. For obvious reasons, it is therefore not necessary to put the RC vehicle back into operation after the automatic switch-off system has intervened.

A LiPo battery is filled with a charger specially designed for this purpose. This should use a so-called ballancer cable which, in addition to the main power supply, ensures that all cells of the battery receive the same charge during charging. If such a cable is not used, charging time and battery life are reduced. Furthermore, unbalanced charging reduces the maximum capacity of the battery.

Modern prototypes already use up to 16S technologies, but a vehicle with 2S technology is still not old-fashioned. Here, too, modern motors and control electronics are used, which are constantly being improved. An RC vehicle with 2S electronics is for a beginner a hardly to be brought under control sports equipment. Only after a longer experience should one strive for greater things. As a beginner you will find a very good price-performance ratio in the segment of 2S vehicles without having to do without the noise of sheer speed and performance.