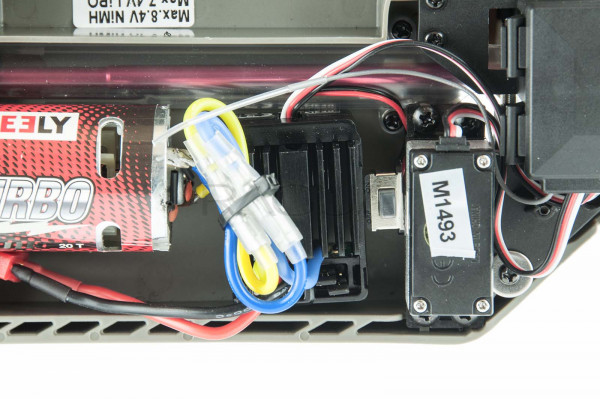 The engine, the heart of RC vehicles, comes in two variants. As'Brushed' or'Bushless' engine. The Brushed variant can now be considered obsolete. In terms of performance, it cannot keep up with the newer brushless motors. New RC cars therefore only use brushed engines. The difference between the two variants lies in the design. Brushed motors use sliding contacts (bushes), which supply the internal, co-rotating coil with power through rotation and reverse polarity through rotation. A much more effective method is the brushless version, in which the magnets rotate in the motor and the coils are mounted on the outside of the housing. Sliding contacts are no longer necessary. However, the polarity reversal must be controlled by a controller.

The characterizing data of a brushless motor are 2 key figures. For example: 3500 KV 3650 The first value indicates how many turns the coils have and the second value, the so-called KV value, indicates how many revolutions per minute the motor rotates per volt of applied voltage. A KV 3650 - motor operated with 2S-LiPo, i.e. maximum 8.4 Volt (fully charged), has a maximum speed of 30660 / min. speed means speed and torque means propulsion. The first characteristic value of the motor indirectly represents the torque of the motor. More turns means more power. Conversely, however, the maximum speed suffers under large number of turns, which is then indicated again via the KV value.

The controller 'manages' the power electronics of the RC car. It also controls the coils of the brushless motor. Such a motor is connected to the controller via 3 thick cables, as very high currents of up to 3-digit ampere-values flow here. A rotation is then induced by a clever reversal of the polarity of the internal coils. The information that the controller receives from the receiver electronics is processed here.

The 2- or multi-channel receivers are usually connected to the remote control via 2.4GHz technology. The analog data of the remote control can thus be transmitted to the controller, which then controls the motor accordingly. This technology makes it possible to achieve very long radio ranges with relatively small antennas.

In addition to its dimensions, a steering servo is characterized above all by the two values torque and operating time. A particularly low actuating time and a particularly high torque are desirable. The positioning time means that an angle of 120° can be moved within a specified time. Good servos achieve positioning times of less than 0.1 seconds. Good torques for RC cars from 10 N / cm can be described as such. The manufacturer of a servo always specifies these values.

Another important quality feature of steering servos is the servo gear. This can be plastic or metal. The latter is to be preferred.

In addition to its power supply, a servo also receives information about the position into which it is to move. If a mechanical problem prevents this from being possible, the motor burns out due to overheating. In most cases this can be prevented by a servo saver in the steering linkage. In the event of a blockage in the boom, this enables the servo to reach its target position but the wheels to be decoupled from it. Despite the blockage, the servomotor does not burn out.